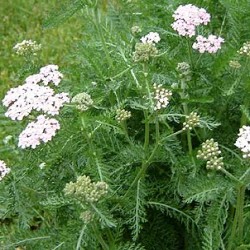 Common Yarrow is a hardy perennial herb, which  can be found growing wild all over the world, but is most common in Europe, Asia and North America.

Yarrow is a drought tolerant plant which grows best in a poor, free draining soil.  The leaves have an almost feathery appearance, and are arranged spirally on the stems. Flat clusters of small white flowers appear in summer to autumn. These may be slightly tinged with pink.

As a medicinal herb Yarrow can be anti-inflammatory, anti septic and can applied externally for wounds, nosebleeds and ulcers.  It is also thought to lower blood pressure, and can be used to relieve indigestion.

Yarrow was commonly used by Native American tribes for bleeding, wounds, and infections. It is used in Ayurvedic traditions, and traditional Chinese medicine credits yarrow with the ability to affect the spleen, liver, kidney, and bladder meridians, or energy channels, in the body.

In folklore, Yarrow was used in Druid ceremonies and was strewn on the threshold of houses against witches and evil forces. If eaten at a wedding feast, it was claimed that the bride and groom would remain in love for seven years.

Achillea’s generic name is derived from the Greek hero Achilles who, during the Trojan War, reputedly used it to treat his wounds. Its specific name means ‘a thousand leaves’ and refers to its feathery foliage. The folk name Nosebleed confirms its traditional use as an emergency styptic. The name ‘yarrow’ is a corruption of the Anglo-Saxon name for the plant, gearwe.

Use Yarrow with caution, as large doses or prolonged use can cause headaches, rashes and skin sensivity.

Yarrow is available now at The Herb Patch