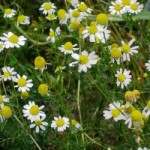 German Chamomile is available at The Herb Patch now.

It is an annual form of chamomile with daisy like flowers in the summer.  German Chamomile has delicate, fern like foliage, which flops around giving the plant a delicate appearance, yet the plant is surprisingly tough and resilient.

Both the leaves and the flowers can be used to make tea, although the leaves have a slightly more bitter flavour.

German Chamomile is the preferred variety for medicinal use, due to its higher oil content. It has powerful antiseptic and anti inflammatory properties.   An infusion of Chamomile flowers can be used as a hair shampoo, especially for fair hair. The flowers are sometimes added to cosmetics as an anti-allergenic agent or made into a salve for use on hemorrhoids and wounds

Other uses include  as a liquid feed and plant tonic, effective against a number of plant diseases.

An essential oil from the whole plant is used as a flavouring and in making perfume. The dried flowers are used as an insect repellent.

It is said that the Egyptians dedicated Chamomile to their sun god and valued it over all other herbs for its healing qualities. Due to its sedative and relaxing properties Chamomile was an ingredient in some love potions in the middle ages.