Teasels are probably most commonly known for their brown, prickly stems and conical seed heads which persist long after the plants themselves have died back for the winter. Between July and August, when Teasels are in flower, the spikey flower heads are mostly green with rings of purple flowers. Found in damp grassland and field edges, or on disturbed ground, such as roadside verges and waste grounds,

Teasel flowers are popular sources of pollen and nectar for bees and other insects. Teasel fruits prolifically, its persistent seed heads attract goldfinches. 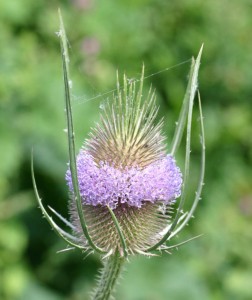 Teasel flowers are distinctive in that  the dark pink or purple flowers begin opening in a belt around the middle of the spherical or oval flowerhead, and then open sequentially toward the top and bottom, forming two narrow belts as the flowering progresses

Teasel will grow to a height of 2 mtrs or more, so really need to be in a position where this will not cause a problem.  They also self seed very readily and in large numbers leading to some countries regarding it as an invasive species!

The teasel is so called because textile makers used its spiny combs to ‘tease’ cloth – cleaning it and raising the ‘nap’ or fuzzy surface. It wasn’t until the 20th century that they were replaced by metal combs.