Southernwood (Artemisia abrotanum) is a perennial shrub, and a member of the aster family, 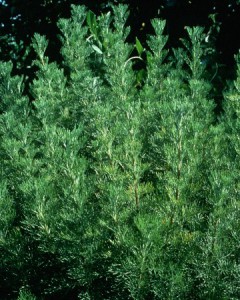 Its foliage has a lemony scent that is repellent to insects and moths. Being native to southern Europe perhaps gave this herb the name southernwood.

Southernwood is also known as southern wormwood, telling of its close relation to wormwood, (Artemesia absinthium). Both of these aromatic plants contain absinthol, a main ingredient in the liqueur absinthe.

This herb rarely flowers, so it is best propagated by root division or via cuttings. The flowers are small and yellow when they do appear in late summer and early autumn. The leaves are narrow, gray-green and appear feathery. It is a hardy herb  and not frost tender. Not requiring full sun, this herb can be grown successfully in partial shade, for instance in open woods or at the edge of a woodland.

Southernwood is also called a number of names relating to the belief that this herb had aphrodisiac-like properties. At one time there was a practice among young men to bring their ladies bouquets of flowers that included a branch of this aromatic herb. So, it was given names like lad’s love and maid’s ruin.

It is used in cooking in Italy and little where else. Young shoots and flowers are used to flavor pastries, puddings, cakes, salads and vinegars. The bitter, lemony scent of the foliage is appreciated in herbal teas.

Used in the past as an air freshener or strewing herb, southernwood has a strongly bitter, lemony aroma. The aroma will keep insects away as it acts as an insect repellent. Branches are hung with clothes to prevent moth or insect damage, in which case it’s called  ‘clothes protector’. Planted in orchards among fruit trees, southernwood will protect fruit trees from damaging insect pests.

The branches can provide a yellow dye that works well with wool.

Folk medicine saw use of this herb for expelling intestinal worms and treating other maladies, including liver, spleen and digestive troubles. A tea made with this herb was used as a hair rinse to combat dandruff. The leaves were used to protect wounds and speed healing with poultices made of the crushed herb or soaked with a herbal tea made from the leaves.

Southernwood has attractive foliage with a great aroma, the scent of which is awakening. In herb gardens these plants are deer resistant and drought tolerant, once established.