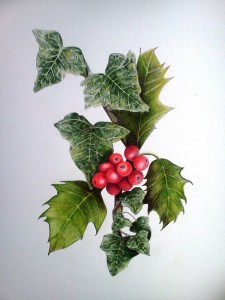 Although the Christmas tree is now the season’s dominant icon, throughout most of history holly and ivy enjoyed top billing. Both were powerful talismans in Europe’s pre-Christian religions, because they flourish, and even bear fruit, in the dead of winter. To the Druids, holly’s green leaves symbolized life; its red berries, creation and rebirth. Holly is in fact the origin of what are to this day the season’s official colors. Ivy is soft and embracing. As a graphic metaphor for love and harmony, a cluster of holly bound with ivy presided over festivities in England until the mid-nineteenth century.

All that was missing was mistletoe. This was eventually added, and the resulting “kissing bough” hung from the ceiling. The ancients believed that enemies who fought beneath mistletoe would incur divine wrath, hence its ubiquity during the season of peace. The presence of mistletoe called for a gesture of conciliation—usually a kiss. (Under the original rules, however, a berry must be picked for each kiss accorded, and the sprig taken down when stripped bare.)