When to harvest herbs is really dependent on the type you are growing and the plant part you intend to use. For example, when harvesting mint, you’ll just be picking the leaves. In other cases, you may be picking the flowers, seeds or roots.

As a general rule, herbs grown for their leaves should be harvested before they flower. After they flower, most herbs tend to lose their flavour or become bitter. You also want to pick the leaves when they are tender and contain the highest amount of oil, which supplies taste and fragrance.   For most herbs, the best time to pick is early in the morning just as the dew evaporates, but before the heat of the day. Do not wash the leaves or aromatic oils will be lost.

Many flowering herbs, like lavender, borage and chamomile, should be harvested before they are fully open. Harvest herbs grown for their seeds, like dill, fennel, coriander and caraway, as the seed pods begin changing colour. Roots crops, like marshmallow or horseradish should be dug at the end of the summer or early autumn.

Harvest early and frequently to encourage plants to produce new growth. It’s okay to prune a perennial to about half its height. You can cut back an annual even more — to just a few inches. Many culinary herbs, including chives, basil, mint, parsley, and oregano grow back quickly and benefit from the constant pruning. 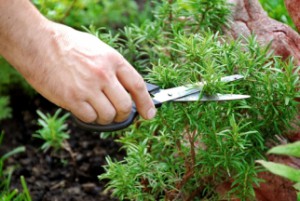 Keep harvesting annual herbs right up until frost. Perennial herbs should not be “snipped” past August. Harvesting perennials after this date (or one month before the first frost) may stimulate new growth that will not harden-off before the cold of winter.

Tip: Gather lavender flowers in early July and then cut the plants back to about half their original height to promote a second bloom in the autumn